FINALS – John Coghlan competition to come to a conclusion in May
THE semi-finals and finals of the Alo Gowran Singles of Mullingar Bowls were held in the Bridge and Amenity Cen¬tre on weekend of 23/24 April 2016.
The first semi-final was be¬tween Kevin Nolan and Glen Ridsdale with Kevin coming out on top after a great game. The second semi-final was between Ken Ridsdale and Sean Harraghy and when Sean appeared to be winning the tables were turned on the second last end with Ken coming out on top.
So it was down to Ken and Kevin to compete in the final. Ken, with determination and skill, claimed the title for the fourth consecutive time.
Derek Gowran was on hand along with the Club Chairman to present the prizes.
The Chairman thanked Gowran’s for their continued sponsorship of this competition and in response Derek Gow¬ran said he was delighted to be involved and enjoyed visiting the club for this occasion. 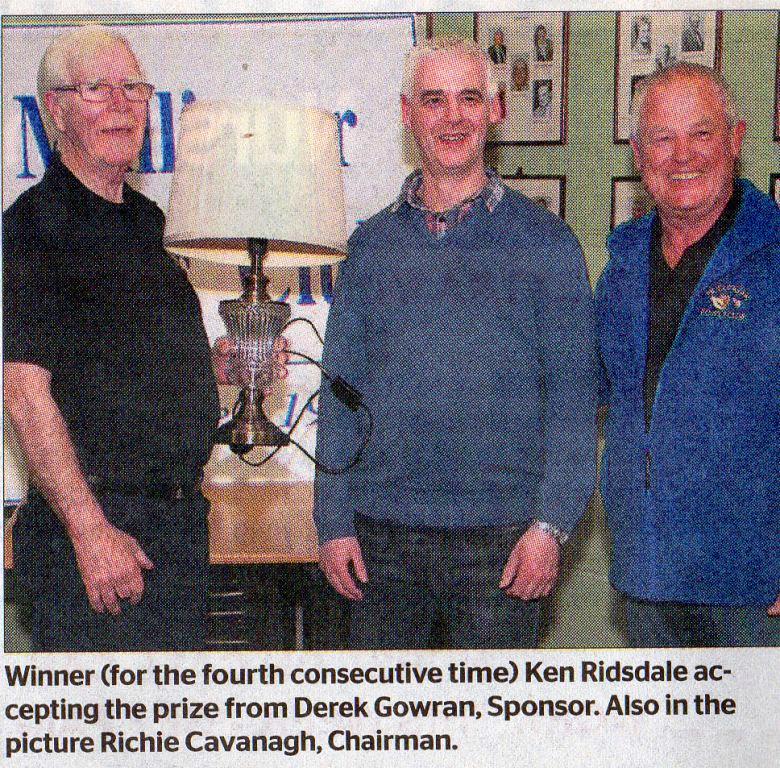 TEAM SHIRTS
Many of the club members turned up in their new outfits to support the contestants in the final and got together for a photo shoot after enjoying some finger food at the end of the competition. The 2015 Cathaoirleach Awards Grant helped the club purchase the new outfits.

JOHN COGHLAN COMPETITION
This is another Singles Competition over 20 ends with the losers of the first round going into a draw to play for the plate over ten ends. A number of matches have already been played with Eoin Corrigan beating Glen Ridsdale.
Richie Cavanagh beat new member Declan Cooney while Paddy Montgomery, just back from his honeymoon beat Andy Boyle and went on to beat Richie Cavanagh in the second round.
Ken Ridsdale has beaten Michael McCormack and will now meet the winners of Sean Harraghy vs John FitzSimons, who got a bye. The draw for the Plate has taken place and can be seen on the Club’s noticeboard.
The finals of this competition will take place towards the end of May 2016 and afterwards the club will take a break until September.